The best conclusion to a mystery is proof that the answer is unraveling but the end is not yet reached. Here we have silver medallions which were found in a mound in Scotland called Norrie’s Law located at Latitude: N 56.254847° and Longitude: W 2.954534°.  (56.254847 + .2954534 = 56.550) There was a large amount of silver, some Roman coins and some other elegant items such as very thick silver chains and crescent shaped articles similar to those found in Ohio mounds. This would indicate some of the “garbage” at both distant places is very similar.

Translation of Norrie’s Law (Part I) by B.L. Freeborn. Photo by Johnbod, CC-BY-SA-3.0

By studying the medallions we meet Baal again. We find the god Dagda spelled out in Luwian Hieroglyphs as Dog-ta or number 79 and the symbol for the Shepard. Thus, we may not as of yet understand how but we can presume 79 guided them. We also find numbers we saw at Newark earthworks and even more compelling we find numbers from the Weld-Blundell Prism. This prism is a cuneiform text which contains the Ancient King List from the Deluge forward. All this suggests the mounds were part of a much larger world culture.

And so too in this previously untranslated Pictish Stele from Aberlemno, Scotland we find understanding and confirmation far beyond what we had hoped at the beginning. Prominently placed at the top is the Luwian Hieroglyph for Thunder. Its form reminds us of the Great Serpent Mound, Ohio with its 4 loops in one direction and 3 in the other which creates 43 and 2 x 43 is 86. But on this stone the eye is within one of the loops. Add this one eye to one loop in one direction and two in the other and we form the number 112 or 2 x 56.

Indeed, the stone even shows a Proto-Canaanite/Hebrew/Phoenician letter H at the bottom which has value 8. And to what does 8 refer? English creates a pun of the word eight. It is ate. Are they saying it ate the planet just as the Beltane-Newark story tells? But there is a dot punched into the upper line. Is it to be read 8 – 1 or 80 -1 = 79? Or does it mean the grid of measurement (longitude and latitude) was damaged? But on other stones 6 lines extend down from the H. This gives 8 + 6 = 86 for the Sun. There may be lines here as well but the weather takes from us what we would know. This H is called the “comb” in Pictish art descriptions. 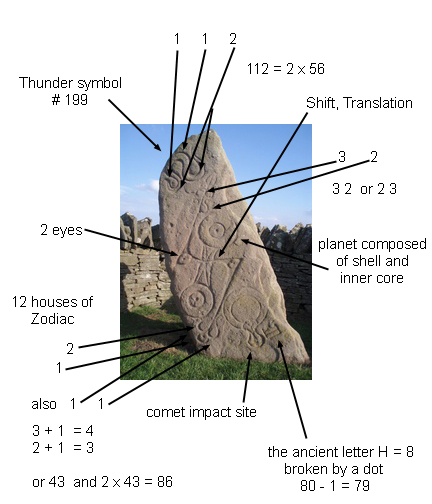 There is a circle with a handle that is called “the mirror” above the H. We have seen this image before and understand its meaning. The stele then speaks of a great comet that thundered into the planet leaving a wound in the Earth which is portrayed identically on the stele as in the Great Circle of Newark. Indeed, this same symbolism can be found in other places. It also appears in the Book of Kells from Ireland (See image in this post). We see the mirror and the H again clearly indicating a break in the box or grid.

The numbers 2311 and 33 are just as prominent here as on the medallion. The two and three reminds us of the layout at Newark with its reference to 23 and in reverse 32 for the Arctic Circle. Here we might sum the 2 and 3 to 5 while the 3 and 3 sum to 6 giving us familiar 56. The sum 6 reminds us further of the 6 OCD of translation of the circle-octagon into the circle-square of Newark. The concept of the translation is dominant in this image between the two identical circles showing a realistically layered planet with a core.  There is more to understand such as the riddle as to how 79 guides them.

A whole new way of reading history lays before us.