Understanding what happens during large comet impacts requires some knowledge of Earth’s magnetic nature and magnetism in general. Two problems present immediately. The first is magnetism is poorly understood in and of itself. The second is that a closer look at the ‘facts’ we are being told about Earth’s magnetic field suggests that they may not be facts. The purpose of the next series of articles is to examine some of these existing beliefs and propose new theories.

The basic understanding today of the earth’s magnetic field is as follows:

“Earth’s polarity is not a constant. Unlike a classic bar magnet, or the decorative magnets on your refrigerator, the matter governing Earth’s magnetic field moves around. Geophysicists are pretty sure that the reason Earth has a magnetic field is because its solid iron core is surrounded by a fluid ocean of hot, liquid metal. This process can also be modeled with supercomputers. Ours is, without hyperbole, a dynamic planet. The flow of liquid iron in Earth’s core creates electric currents, which in turn create the magnetic field.” – NASA, Nov. 2011

We are also told that the direction and strength of Earth’s previous magnetic fields are recorded in the lava that flows out from below the crust as the ocean floor spreads at the mid-Atlantic rift. It forms measurable bands that reverse direction periodically. Research ships have detected and recorded this data for later compilation. Both computer and actual modeling has filled in the blanks in understanding. This is how theories such as we see above about Earth’s magnetic field were developed.

(Caption for the above reads: “A survey of the Earth’s magnetic field in the vicinity of the Mid-Atlantic Ridge south of Iceland shows magnetic anomalies aligned as paired stripes in the direction of the ridge. The youngest material is found at the ridge axis. A change in color indicates a reversal of polarity in the magnetic field. Different color indicates different age since rock formation, age increasing away from the Mid-Atlantic Ridge. The 100 m and 1000 m depth contours are also shown.” http://www.incois.gov.in/Tutor/science+society/lectures0
/illustrations/lecture31/magneticstripes.html)

There are however many scientists with dissenting opinions as we see in the two quotes here:

(1) “The intensity of the Earth’s magnetic field over the Atlantic Ocean has been measured on a number of flights organized by the Department of Mines and Technical Surveys of Canada and also under Project Magnet (U.S. Hydrographic Office). Some of these flights passed over the Mid-Atlantic Ridge and the magnetic observations show that there are large anomalies associated with the crest of the Ridge in some crossings, but not in all.” – Magnetic Anomalies over the Mid-Atlantic Ridge, M. J. Keen, Nature.com

(2) “I would claim that the models are very far from being realistic, and therefore the inferences we draw from them about the Earth are going to be questionable,” says geophysics professor Bruce Buffett of UC Berkeley’s Department of Earth and Planetary Science. Planetary magnetic fields: The hunt for better models, November 25, 2010 by Monica Friedlander, ScienceMatters@Berkeley
Read more at: https://phys.org/news/2010-11-planetary-magnetic-fields.html#jCp

There are other scientists whose research supports NASA’s statement:

(3a) “The quadrupolar field (it is likely to be a quadrupole but another structure could be possible) is also generated by the flow of the liquid core of the Earth, exactly like the dipolar field,” explained the researchers. “Most of the time, we observe a dipolar field because it is more easily generated by the flow, but in other conditions a quadrupolar field could be maintained, and this occurs in a temporary manner during a reversal.” Reversals of Earth’s Magnetic Field Explained by Small Core Fluctuations, April 23, 2009 by Lisa Zyga who quotes from Pétrélis, François; Fauve, Stéphan; Dormy, Emmanuel; and Valet, Jean-Pierre. “Simple Mechanism for Reversals of Earth’s Magnetic Field.” Physical Review Letters, 102, 144503 (2009).
Read more at: https://phys.org/news/2009-04-reversals-earth-magnetic-field-small.html#jCp

The authors (Pétrélis et al.) above speak of fields. For clarity, there is no such thing as a quadrupolar magnet. A magnet will always have just two opposite ends on its one pole (a dipole), and that magnet will always exhibit at the midpoint a Bloch Wall or Dielectric Plane. One can arrange individual magnets in an infinite number of ways to create anything from quadrupoles to infinite-poles but one still has individual magnets so arranged. The reference to a quadrupolar field presumably suggests the intersection of two magnetic fields which are not always acting coherently so as to reinforce each other, may be of unequal strength, and may act to cancel each other out in certain areas to the extent no magnetic properties are observed.

Pétrélis et al. (quote 3a) suggest the liquid core forms the quadrupolar field presumably as it shifts about via convection then the orientation of the poles flip and it regenerates itself as the opposing dipole dominates. The system can then become harmonious again until it just isn’t and the cycle repeats. Or, the opposing pole vanishes and the process is aborted until it begins again somehow.

One finds this additional statement at the end of the Pétrélis article:

(3b) “Although little is known about the actual flow inside the Earth’s core, recent observations have shown that the ends of superchrons are often followed by major flood basalt eruptions, which are likely to produce equatorial symmetry breaking of convection at the core-mantle boundary, in support of the scientists’ model.”

This statement is a loop. The end is followed by the cause which drives the system. The flood basalt (large cooled volcanic) eruptions result in disturbances in the core-mantle boundary which drive the quadrupolar process. Are they proposing the process described is a mechanism in true perpetual motion? Where does the energy come from? Or is there a clue in the statement “superchrons are often followed by major flood basalt eruptions”?

If Earth’s magnetism is solely the result of the fluid core’s movement, eventually it must wind down to a near standstill which would result in the dissipation of the magnetic field. But this is not what is seen recorded in the rock. Something is required to get it moving again and keep it moving especially after superchrons (long stable periods). That something must supply a large quantity of energy yet not destroy the system which brings us back to the idea of comet impacts.

Lines of Force around a magnet. Wikipedia.

There are other ridiculous constructs we just have to let go of if we are to move forward and really understand the Earth and magnetism. Observe these often repeated images. 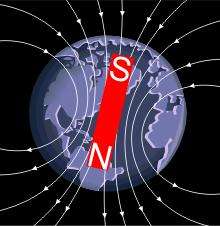 What is wrong with these images? Think about your experience with magnets. Both images show lines pointing inwards on one end and outwards on the other end. Are magnets little motor boats motoring though the universe? Is the Earth sucking in at the top and shooting out at the bottom some force?

So perhaps there is more to think about and discuss.

More to come…. in the next section. Back to Index and beginning.

3 thoughts on “The Greatest Mystery of all Time: Earth’s Magnetism”