Baal, a Statute from Ugarit.14th to 12th BC. Louvre, Wikipedia.

Beltane and Baal are they related? It has already been proposed that they are. The scant information on Beltane suggests it involved building bonfires, the union of male and female, fertility, and the maypole. The maypole ceremony involves weaving long ribbons around a large pole held vertically. This idea is usually interpreted in the classic phallic manner. Yet, we might travel further in our understanding of the ancient world if we broaden our minds a bit. Can we not represent the north pole as a vertically held pole? Do not the lines of longitude project out from the pole in the same manner as the ribbons on the maypole? Certainly then, the object of weaving the lines about the pole is to remind us that lines of longitude and latitude are measured from this central point. This concept can be found not only in the Cuneiform records but it can also be found in Native American lore, just as the Noah story appears in both places. It is a relatively easy concept to understand but twice as easy to misunderstand if one has never been taught about longitude and latitude. It was simple then to relegate the maypole to a sanitized sexual symbol.

The word Beltane conjures up the image of a bell. While the word Baal brings to mind a ball which is reinforced by images such as we see in this Baal-Ugarit Statue. Yet these images converge if we picture that a fiery ball might appear as a bell and indeed, in Old English, a baelfire is a funerary pyre. What possible connection can there be between a maypole and a ball-fire? This is one facet of the story Newark might help answer. 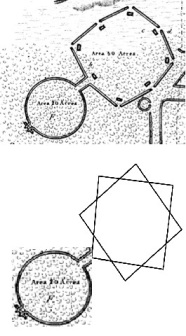 Circle and Octagon of Newark, Ohio Earthworks portrayed as a circle joining with a square.

The pieces of Beltane we are left with is the concept of male, female and fertility. Since it is a spring festival we might assume these latter parts are all self-explanatory but we can take them another way as well. We look directly at Newark now and see that Baal, Bael, can be described by the circle which leaves the square as its counterpart. So then, in the circle-square we have the union of male and female which is indicated by the circle-octagon with the neck between them. Let us say the circle impacts with the square and causes it to rotate. There are two identical squares within the Octagon which are rotated. Let us say that the union is so abrupt and intense that the square breaks outwards. It is shattered and torn. The Old English word for torn is teon which is of course derived from the number ten and our fingers. Our ten fingers are used to tear apart. Hence, ten becomes teon. Now we have a better understanding of the word Beltane. It is Baal-teon which is then correctly illustrated here. Baal has impacted with the square which we may assume is Earth and it is torn apart. The image of Newark explains the effect of the impact is not only a rotation but a shattering. The images further relate a shift occurred which is portrayed to us by the translation of the two images across the plane equidistantly 6 diameters or 1.2 miles which echoes the statement “the earth was created in 6 days. 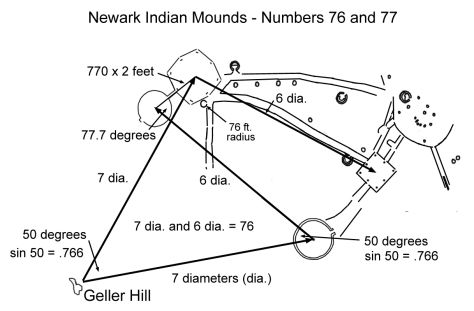 Circle and Octagon translate 6 OCD across plane to become circle and square. Drawing by B.L. Freeborn.

Right side of Newark Earthworks taken from Burks drawing.

We can then postulate that the three images on the right indicate the condition of Earth after meeting Baal, its new relationship to the Sun, and an oval which we do not understand as of yet. The Great Circle as the Earth indicates the distance it travels in a year, the length of its day, and its velocity via the numbers 580, 1200 x 2, and 66.6. But we need to interpret the steeply formed neck, the bird, and the crescent in relation to the circle. The answer is supplied  by the artifacts which have been found: balls, crescents and meteoric iron. In fact, there is another clue supplied in an article by Romain.1 The Great Serpent Mound is built very near the Serpent Mound Impact Crater in southern Ohio. The .8 mile diameter crater was caused by a meteor impact between (we are told) 256 and 330 million years ago. All things considered it would seem then that the “bird” within the Great Circle is a meteor and the steeply formed neck is its impact site into the Earth. The crescent below the bird then is its crater driven deep into Earth. This suggests more than a passing understanding of the formation of craters such as the one found in southern Ohio.

Moving to the second of the earthworks on the right side we have a square. This exhibits measurements present in Earth’s orbit. The square as a symbol of measurement is found identically in Olmec art and Assyrian art.2 It is presented in Egyptian art and identically in Sumerian art. The square is the foundation of measurement. We can see this for ourselves on any map that shows longitude and latitude. The lines form squares.

This leaves us once again at the Oval where we remain perplexed for just a wee longer.