Sketch of Decalogue Stone of Newark, Ohio. By B.L. Freeborn.

The explanation of the Oval at the Newark Earthworks in Ohio is simple but of exceptional debate. We need to ask what elements in the Beltane story, Newark Earthworks and the Newark Decalogue have we left out? We have discussed the possibility that the oval was once filled seasonally with water. We have discussed how the Decalogue Stone appears to be a little ark. We might recall that the Oval is the shape of the egg at the Great Serpent Mound. In that respect, keeping with the story then Baal may be the serpent and the Oval would be another representation of the Earth since in fact the planet is just sightly oval not round. We have discussed the finding of meteoric iron and crescent shapes and the idea that the Great Circle shows a sideways impact of a comet into the Earth. Could the Oval be a further description? It would have been nice if they had just wrote it out in plain Old English so we would not have to guess. Ahhh, did they?

Recall the overall layout gave us the idea of 23 32 or “keg Baal.”  But 23 degrees 30′ is in fact the limit of the Arctic and Antarctic circles. The center of these two circles are the poles which relates back to the maypole.

We might ask what else the Ancients tried to portray here. All three maps of the site, Burks’, Squier’s and Wyrick’s, depict the oval with a U shaped appendage to the west. There are also several strange paths with bump-outs to the west. Is it possible that this large oval and projections are letters or words? It is possible that the east side of the oval had a similar appendage as on the west that has worn away with time and creek flooding. This would make the Oval similar in concept to the Luwian Hieroglyph shown below. This glyph is unnamed but is associated with the sound “la.” 1

This form of writing called Luwian or Hittite Hieroglyphs is from the area of Hattusa in present day region of Anatola, Turkey and northern Syria. Evidence that this writing dates from third and early second millennia BC exists. There is no evidence of its use after 7th century BC per academia.2 Its use has been previously demonstrated at Loughcrew, Ireland3 which is believed by some to be much older than the 5500 year old Knowth Tomb, Ireland where several examples have been demonstrated.4 An example of Luwian Hieroglyphics will be shown at the conclusion of this series from a much later period. 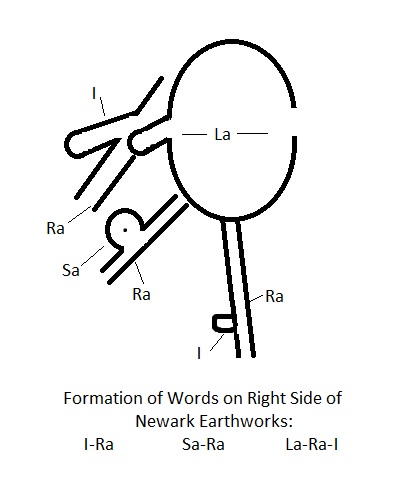 It would seem this symbol of a circle with two ears is not the only Hieroglyph to be found at Newark. Since Wyrick’s map is believed to be the most accurate, the Oval portion of his map is redrawn here for our study. A comparison of the simple geometric figures with Luwian Hieroglyphs produces a translation as we see in this image.5 Three words are written out. The main oval is Symbol number 445 with sound “la.” Attached at the bottom is the line pronounced “ra,” Symbol number 383. Off the side of Ra is a hump or Symbol number 209 or 210 and sound “i” or “ia” which gives the word: La- Ra- I.

The middle set of lines with the circle and dot is Scutella 402 (Latin for shield) pronounced “sa”. The line beneath is “ra,” Symbol number 383. This forms the word Sa-Ra.

The third word is a combination of the hump out “i” and “ra” to form I-Ra.

We need a translation of “Larai Sare Ira.” How fortunate! This is written in English, Old English that is! 6 7

Sa-Ra provides: sar = to sear, or sare = sore. And I-Ra could be irre or ierre which means fierce, angry or ire.

The sentence then becomes “Ire sore lair” or in modern terms “An angry sore, an emptiness.” This provides us with a meaning for the Oval. It represents the place where we might presume the event of Bael-teon occurred or where the comet they are referring to as Baal impacted.

Is this sore in southern Ohio? Is it the .8 mile crater that forms the hills into strange sheared plains? Would this event motivate people from half way around the world to seek it out? Not likely. The construction so close to the creek so the Oval can be filled with water suggests they are referring to a watery grave and to have drawn the attention of the ancient world it must have been a significantly larger impact. What event do we find described world-wide that everyone scoffs at?