The Ramey Peet Tablet is from Mound 18 at the Cahokia Mound Site in Collinsville, Illinois very near St. Louis. Comparing and analyzing this tablet as has been done with the Ohio Tablets does not disappoint. It is generally assumed that only half the tablet has been found. However, the first thing that should be noted is that as presented the tablet forms a cup shape and that in and of itself indicates the topic. The shape suggests this is about a great event which involved a crater despite the fact that to a casual observer the front face appears to depict two chanting men and the obverse two woodpeckers. So, we shall look closer and discover not only two comets and lots of numbers but some rather familiar Luwian/Hittite Hieroglyphs from ancient Turkey. 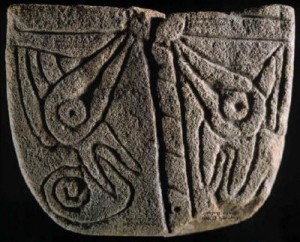 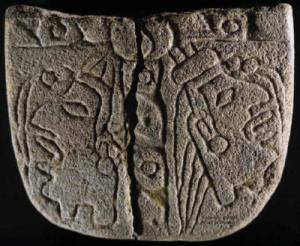 The woodpecker side positioned as shown can be described as two panels divided by a center bar with cross pieces. In other words there is a ‘T’ here. The ‘T’ is found in Egyptian art as the lower portion of the Ankh in the hand of Isis. (See Iuny Stele)

At the top of each half of the woodpecker side are crater shapes just below the T side bars. Emanating from or pointing towards the center are the tear drop shapes surrounding the ‘sa’ symbol often seen on the Ohio Tablets. This can be interpreted as before. It reads two comets struck the center of the pole and/or that two comets divided from one larger comet. Each of these figures overlap what appears to be double (comet) tails. On the right side there seems to be a hook shape around the tail implying once again as seen on other tablets the symbol for a hook or staff. The left side shows the twirl symbol seen on the New Hampshire Mystery Stone suggesting something turned.

Combined the symbols relate the identical story as deciphered before. A great comet broke into two parts and after striking the pole the staff/pole was turned.

From the New Hampshire Mystery Stone

Notice the numbers indicated on the center bar. It is divided into 6 portions but only one contains a dot. There are 5 without dots out of 6 portions or the number 56 appears again. Notice on the left panel there are 4 bars beneath the crater but only 3 on the right side for 43 or 34. The sum of 34 and 56 is 90. There are 90 degrees from the pole to the equator. The 43 reminds us the radius of the Sun is 432,000 miles.

Overall, this side is a simple statement of the basic numbers and narration. The obverse side is a bit more challenging but as seen in the examination of the Egyptian Iuny Stele these distorted faces are composed of numbers and glyphs making the fellows look rather unique.

An overall description of the second side would be two men chanting with a ‘T’ shape dividing the image. Beginning with this T notice it is divided into three sections at the top with a center knot. There are four sections in the vertical portion. This gives us three familiar numbers immediately: 33, 34 and 43. The first two refer to the change in the lay of the pole and the latter to the radius of the Sun. Count the sections with dots and without. There are 5 with dots and 6 without. The number 56 is easily created. Count the dots on the vertical and then the crossbar, and find 2 then 3. The numbers 23 or 32 can be created or the latitude at which the Arctic Circle ends. The ‘T’ then represents the north pole and the large dot-knot at the top suggests a large crater.

Notice there are dots in the faces as well. Each man has two circles at the forehead and those circles have tails. Instead of viewing them as headdress ornaments perhaps they should be viewed as a statement that ‘two objects struck at the crown of the head.’ The image once again describes a comet striking the planet on the ‘crown of its head.’ Each man wears a large circular earring beneath his ear. This recalls something present on the McKensie Tablet. The whorls within the average ear are an orderly disarray of circles around the central canal and that is a good description of the McKensie Tablet. The placement of the large circle below the ear suggests that circular disorder radiated out from the central crater. Hence, we might recall that the Egyptian Iuny Stele also made use of the ear. In that instance it is carved with great care and skill to accurately portray an ear yet the eye is shown from the wrong angle. This striking difference must be intentional. The ear in the Egyptian art suggests radiating disorder from a central eye. The symbolism reveals a common theme. Taking it one step further, in Old English the word ‘ear’ means wave.

The hats demonstrate more numbers. The left side has three sections. The right has two. Create 32 and 23 again. The dots with tails differ. The left side shows one tail and the right shows two tails. The Wilmington showed a two tailed comet on one side and only one tail on the opposing side. So then the statement a ‘comet split into two’ is suggested by this image as well. Now those odd strong lips have meaning. The two comets created two craters.

The nose is interesting. It is bold and is making a statement in a notably Old English way. The word ‘nose’ derives from the word ‘ness’ which means prominence, headlands. It is the most prominent feature on the face, hence the association. The image, by exaggerating the nose, makes it clear that it is part of the story. A mountain can be called a ness. The image suggests the crater lies near the ‘ness.’ The north pole or headlands was once overlain by mountains of ice.

Notice that the eye is portrayed in the Egyptian manner and in this full on view rather than sideways it is the glyph for ‘eye.’ The image with its large nose, accented crater mouth and sideways eye tells us the eye (of the comet) is near the crater and ness/mountain.

Another glyph is clearly present. The Iuny Stele used symbol #243 in both forms to indicate Cubit/measure. This is the distinct shape the hair of these men forms. Each ‘head measures’ and this is a true statement. The north pole and the magnetic pole acting as heads of the planet are both used to measure.

The study is completed by counting. The odd formation of the neck gives 2 nubs. The projections on the face give 3 if the nose is not counted and 4 if it is. This gives us the familiar 23, 32, 24, and 43.

The last number to be found is on the right head. He has four portions to his hair. It appears the man on the left has one or none. The hair is divided to make a count just as was done in the Iuny Stele. Recall that a square of 4 unit sides has a diagonal of 5.65 units. Similarly, 1 and 4 as 14 make 56 since 4 x 14 = 56.

Like the previous tablets this one tells the same important story to initiates. To all others, it is just two men chanting and woodpeckers. The famous statement ‘they have eyes to see but do not see’ is now understood.

The Gridley Stone is up next. It is also a half circle shape and what it reveals is exactly why it has come up missing.

Metcalf Stone, and pdf article on

The link to the museum site with a great deal of information is here:

Vince Barrows has written extensively on the mounds and his work with many diverse links can be found here: http://www.bibliotecapleyades.net/arqueologia/monks_mound03.htm