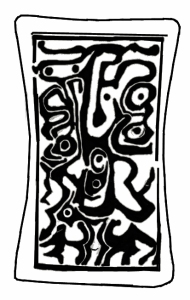 The Bainbridge and McKensie Mound Tablets are both owned by Duncan Caldwell. View actual photos and read his analysis on line here. (Also see link below.)

The Bainbridge is similar in design concept to the Cincinnati and Wilmington. It has sides bowed in as does the Cincinnati Tablet. All three have the feathers of the Prophet glyph giving us the correct orientation for reading it. The feathers were also present on the Lakin A Tablet. The Prophet glyph’s presence suggests the abstractness of the diagram is just a series of combined glyphs. With some effort the glyphs are identified as shown in the diagram below. It tells of a two eyed comet and the staff of guidance. It is where the ‘eye lays.’ The upended Pes/foot glyph on the right side gives us the idea of a base which is turned and the sound ‘ti.’ Two joined craters lie below it with the symbol for ‘ra’ between them forming the word ti-sa-ra-sa or tessarace which appeared in the Lakin A Tablet. A tessarace is the summit of a four sided pyramid. The north pole is the summit of a world divided into square tiles. The word can also be translated into Old English as ti-sa or tease, and ra-sa or raes which is a violent storm or a course. This suggests further meanings to the word tessarace. It describes a place that was harmed by a violent storm which is marked by a line. 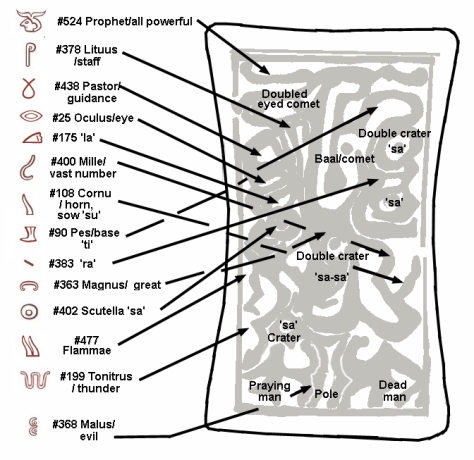 Glyph map of the Luwian/Hittite glyphs found on the Adena Tablet known as the Bainbridge from ancient Ohio.

Below this are two joined symbols. It describes ‘a vast number sown.’ In the center are two craters or ‘sa-sa’ suggesting the word ‘sess’ which means seat in Old English. The symbol for ‘great’ surrounds the highest of the two craters. On the left, three joined symbols suggest flaming-thunder-crater and below this is a praying man turned away from the center. To his back is the symbol for evil and in the center is the pole. The right side is a mirror image of the evil symbol. This symbol creates the legs of a man who is presumably dead since he seems decapitated. This would be appropriate since the message suggests the planet ‘lost its head’ or guiding north pole. 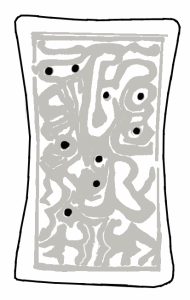 Numbers are indicated on the Bainbridge Tablet by the placement of the dots in the image.

This message is not complete without imbedded numbers. The dots provide them. On the left are four dots. In the middle there are three and on the right are two for a sum of nine. So it can be said there are 7 on the left/center, 9 total, and 2 on the right which can be used to create the 792 seen on many tablets studied already. It refers to the diameter of the planet at 7920 miles. The center 3 and right 2 create 32 or the square of 5.65. If seen as 23 then it reminds us of the latitude at which the Arctic Circle ends. The number 432 can also be created and this reminds us of the radius of the Sun at 432 thousand miles.

Turning now to the McKensie Tablet it is found it repeats the typical message. (See actual photo here) Right side up can be determined by observing that two diamonds appear at the top of the Gaitskill Clay Tablet. One triangle begins the Metcalf Stone and diamonds are present on the Grave Creek Tablet. So the stone should is read as positioned in the image shown here. 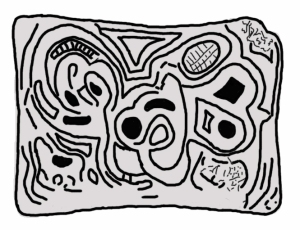 The Adena tablet from ancient Ohio known as the Mckenzie Mound. The sketch is from a photo by Caldwell.

To the right is the circle with hash marks. Hash marks appeared on the Wilmington, and on the Gaitskill Stone Tablet. The Earth when divided by longitude and latitude appears to be overlain by such a grid. Another way to look at this circular glyph is that the hash marks are a separate glyph suggesting ‘ha or pa’ or the old words ‘heah and pea.’ Heah is high or a high power. The symbol also suggests an object such as corn which is composed of many pieces. Then the combination becomes a powerful comet of many pieces. The story then reads: ‘a powerful comet came to Earth.’

The left upper panels says literally ‘two eyes lay at the staff’ or two comets struck the north pole. Below this are two glyphs that suggest there are ‘ma’ which translates from Old English to ‘more.’ The two symbols suggest ‘there are more in heaven.’ Above this series of glyphs is the horn in 9 sections. The planet’s latitude is marked off in 90 degrees equator to pole. The bottom left corner suggests ‘sow’ but the rest of the corner is illegible.

Within the center is a Pastor symbol identical to the one seen on the Bainbridge Tablet just studied above. Next to it is a large ‘sa’ or crater. Above these two symbols is the symbol for heaven and below them is a wedge. This suggests the reading: ‘the crater from the heavenly comet guides.’ 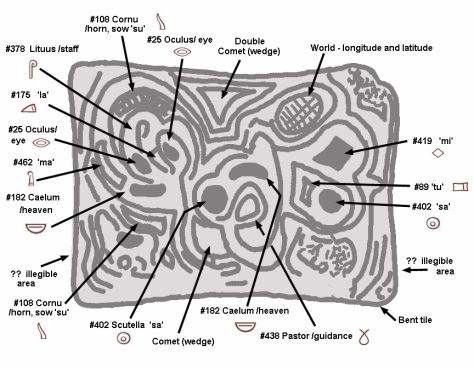 The Adena Tablet from ancient Ohio known as the McKensie Tablet can be deciphered into Luwian/Hittite hieroglyphs from ancient Turkey.

The far right provides three glyphs: mi, tu and sa. The first suggests the Old English word ma for more or mighty, while the latter two are grouped together in the art suggesting tu-sa. The Old English word teosa meaning harm or the modern word tease is then formed. The phrase is then ‘a mighty harm.’

The overall layout of the stone suggests disorder in circular sweeping patterns. It imitates exactly what is observed in areas of comet collisions such as we see on the Moon’s surface. The Bainbridge Tablet also suggests disorder around circular crater marks. They may actually be attempts to depict the aftermath of such an impact with the planet just as the Berlin Tablet did.

The overall shape of both tablets is a tile with bent in sides. The story suggests the grid array of longitude – latitude shifted or perhaps twisted as the shape suggests. Most importantly, the two very round carved out circles suggest Two Balls or Bi-Baals. The pun ‘Holy Bible’ was noted in the Wilmington post.

It can be concluded, despite the differences in the artist’s style, the message of the Bainbridge and McKensie Tablets is consistent with previously studied art. The Ramey Peet Tablet (next post) from Cahokia Mound indicates by repeating this now familiar message and style of numbering that this knowledge and iconography was not restricted to the areas of Georgia, Ohio, West Virginia and Egypt.

The Low Tablet, The Waverly Tablet, Metcalf Stone, and pdf article on

Article by Duncan Caldwell at:  asaa-persimmonpress.com/…/bainbridge_mckensie_adena_tablets.pdf