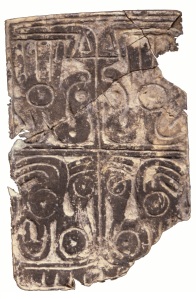 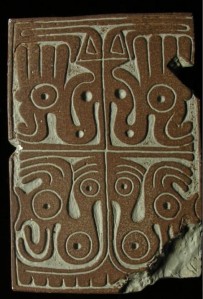 Preserved from ancient Ohio is the Gaitskill Clay Tablet which gives us much to ponder. This stone has been described as having anthropomorphic and/or zoomorphic characteristics. Another author describes it as Avian with four world quarters. If we reflect on the open mouthed man who seemed to be crying ‘no’ in the Waverly Tablet and the angst of the Gaitskill Stone Tablet then it follows that what the artist is portraying is two hands held up as if to say, “Stop!” Above the hands appears two triangles which suggest this is another way of expressing the double eye of the comet Baal. Up and over on each side is the double tail of the comet. The two tails are similar in style to the feathers in the hat of the Prophet Glyph and the curved down feathers seen on the men in the Low Tablet. If the center line is taken as the pole then the reference to four quarters of the world is correct.

There are other details we might notice. In the lower quadrants notice the three lobed wings above the large circle that are like those in the Low Tablet. The Luwian Hieroglyph Symbol #78 Ala meaning ‘wing of army’ is similar. The wing of the Army of Baal would be the debris that preceded, followed and was created by the comet. The image shows multiple circles suggesting many craters of various sizes occurred.

In a prior post the name of the goddess Isis was discussed. It was suggested it means ‘ice-seat.’ At the base of the center pole on the tablet the lines fan out. Perhaps this symbolizes a mountain of ice or the mountain Isis at the seat of the North Pole. But the story these tablets relate is that the pole has a mirror image, a second location to which it moved. ‘Where?’ was the question asked by the Low and Waverly Tablets. Presumably the tablets answer the question. Perhaps this tablet will reveal the answer to us.

The abstraction of the drawing is distracting to say the least. By counting the message becomes clearer. There are 8 large dot-circles. Of these, 6 are on the bottom. On the top there are 4 dots without outer circles and 2 remaining large circles. This gives us 8,6,4,2 which is a descending even series. When combined the familiar 86420 that is reminiscent of the diameter of the Sun at 864322 miles appears.

Those 6 bottom circles can be counted out as 3,3. The top circles as 12, 21 or perhaps it is 1212 or 2121. This all seems familiar and the abstraction begins to make sense. The fingers on each hand give 4 and 4 for 44. The thumb finger combination gives 1414 which we have seen before. Recall 4 x 14 is 56. The bottom fringe can be counted out as 5 upward nips and then the center plus the other side (assumed to be a mirror image) makes 6 for 56. This was found in the same manner on the center strip of the Low Tablet.

In the top half move around the exterior of the hand and count 2 lower tails, 4 fingers, 1 thumb for 241. Also count 2 lower tails, 1 large circle, 2 dots for 212. The 5 fingers on the hands plus 2 tails creates 52 suggesting weeks in a year. The total sum is 7 for the days in a week.

Thus the abstraction is a rather clever way to relate numbers to a people who are both distant in place and time with no common language. It is clear from this list that these numbers and the story related involves the Earth and that someone had advanced scientific knowledge which they wished to share with someone of similar mind. That would be us.

The next tablet is equally abstract but rewarding to study.

Wright, Lakin B and Meigs Tablets,

The Low Tablet, Metcalf Stone, and pdf article on