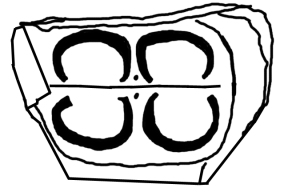 There is an oops in this drawing that reveals all. You won’t see it right off in its simple symmetric shape of four crescents, a line and two dots but here is the thing. If you examine image after image of art from Knowth, Dowth, Loughcrew and Newgrange you will see abstract shapes of swirls, curves, zigzags, crescents etc. but you will never see anything that looks specifically like a distinct letter. A crescent does but it is not distinct enough for one to point at a specific alphabet and say ahah! that is from Ancient ….. It is as though these artists did not have a written language and that is why symbols that appear to be letters or hieroglyphs are absent. There seems to be an overwhelming agreement these ancient builders were illiterate. Yet it is a simple idea that no letters were used in their art because these monuments were built for the eons and people (like us) who would not speak their specific language but who might speak – the one universal language.

So the oops is the letter dead center in the image. A line with a dot on each side according to the eminent Dr. Cyrus Gordon is part of the Hittite (now called Luwian) Hieroglyphic system and it is the letter “wa.” It does not mean this is the Luwian language but if it is “wa” then it confirms these people spoke an Indo-European language just as we would expect. We will come back to this.

Shall we read this mathematical message to us sent across time?

As before, we immediately count 4 C’s in a square shape and draw the conclusion we must square four!  Or 4² + 4² = 5.65².   And there we have the incredibly important and secret number 56 that is central to the deep mystery and appears at Stonehenge (see post) and is incorporated into the Giza Pyramid.

The C shape looks like the Hebrew K so we shall equate it to 20. What then might we equate the “wa” to? In Hebrew gematria the “wa” sound is often indicated by the ‘vav’ which equals 6. This gives us 4 C’s at 20 + 6 or 86. And this is the incredibly important value of the Sun with its diameter in miles at 864,000.

Can there be any other mathematical secrets in this figure?

The 212 divided by the dominant 4C equates to 212/4 = 53. This is not a very big mystery when we realize that Knowth sits at 53 degrees 42′ latitude. We do not have to look hard to find the number 42 repeated in the image. But eghads these are virtual cavemen! They could not measure latitude!

Unless they meant 21 /12 = 1.75 or the more revealing 12 / 21 = .5714 which reminds us of the value of a radian at 57.29. This gives us more to think about because we weren’t smart enough to develop radian measure until a few hundred years ago. Therefore, we project our ignorance onto them and conclude they could not have understood the concept.

But perhaps we have been too technical and they meant us to add the 21 and 12 to get 33. Does 33 mean anything special? As a matter of fact it does. It is one of the often repeated numbers.

So let us go one step further. If they had an alphabet, then what language did they speak?

Perhaps the answer to that has been stolen from us. Martin Brennan records in his book the inscription on a stone which was removed from Loughcrew, Ireland. This is a mountain site which is much older than Knowth and Newgrange. I repeat the symbols here with the warning that they have been reproduced in succession and errors may have crept in.

This then suggests these people did have a written language distinct from the art. Since we would like to think we are quick of wit, let us try to solve the present riddle at hand. We have 2 C’s, a “wa”, and 2 C’s.

Since this decipherment into words is novel we shall do it thrice:

C is the initial sound in crescent, comet, cup and cave and its shape repeats the idea of each word’s meaning. This suggests it has sound value K. So let us stick with it and pronounce the word.  CCwaCC or KwaK.

I am told that at one time all the letters in words were pronounced. So when we read light as lite it is incorrect. The gh in light was once pronounced. This suggests the c and k of quick were both pronounced. Because Knowth is on an island once solidly joined to Britain and Germany by land, and in close proximity regardless, it is not too far a cry to suggest this is one of two English words: quake or quick. The latter has the double c preserved and both preserve the k-wa sound. And if you think about it, they say the same thing. In Old English, according to J.R. Clark Hall, quake and quick are spelled cwac and cwic respectively. And he reminds us that it means “living, trembling”, and “living, alive.”  From Indo-European roots it is found as gwei which is the root of both English “quick” and German “Kwi(k)waz” also meaning alive.  (Old languages did not always differentiate between g and k.) In support of this interpretation, quick and quake are both appropriate to the diagram itself once the over all meaning of the site is understood.

This then suggests once again the impossible, just as an analysis of the Sator-Rotas revealed, and that is, that the English language did not begin around 500 AD as we are educated. For these sites are older than the pyramids. It helps piece together a past for the English language that might just pre-date High German. Is this possible? Time will tell.

We look once again at the Luwian and find that the large bold C symbol is the hieroglyph for the word meaning “great.” So then our image reads great, great, wa, great, great. The hieroglyph is associated with the sound ur. Ur was a very great city of the past. Perhaps this is why the linguists have happened upon the association. In Old English we note that ur can mean our, ore or origin. So then, the image takes on the meaning origin-woe. To understand this better we note that sometimes the hieroglyphs did not represent a sound but the object itself. In this case it could mean great, great woe. So we have “the origin of the great woe.”

So in total we have “the origin of the great woe” that was quick and a quake. It speaks of a great sorrow, a quake, a tragedy, a great woe and great vessels. It speaks of the Day the Pole Moved.

Many more mysteries to unravel…..

Thank you for reading!

See more of fantastic Knowth and Dowth at these links: