How is that more than one researcher can claim these mounds are precisely laid out yet they are so out of round that they vary in their diameter? The Great Circle varies from 1163 to 1189 feet. The Observatory Circle varies from 1050 to 1058 feet. The Octagon is visibly unsymmetrical. It is wider at the end joining the circle. 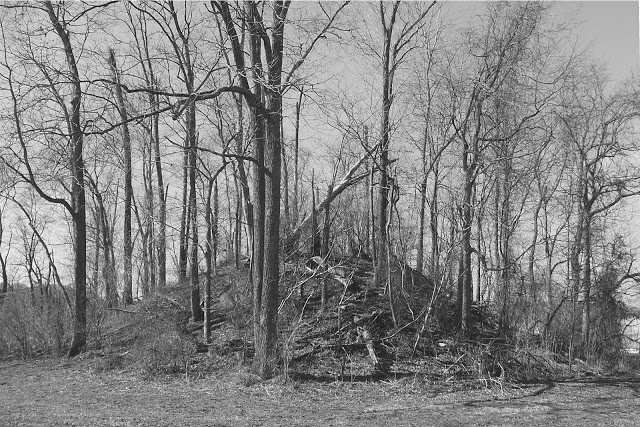 There are three plausible explanations for these irregularities. The first is the variation was intentional as was suggested in the difference between the sides of Wright Square of 926 and 928 and later numbers will show that this stretching was done to achieve certain distances. The second explanation is that when they were reconstructed by the Ohio National Guard and others (see complete explanation in Hively/Horn) they were altered.

The last explanation is creep. Let us say the mounds are thousands of years old and that the reason they still exist today is that on a regular basis they were maintained. The manner in which this is done can contribute to their movement.

The Miamisburg Mound is burned every other year to keep weeds and trees from overtaking it. Many mounds throughout Ohio are owned by the Ohio Historical Society and they allow massive trees to take root. Over time the roots push out, break down and do their part in returning the mounds to the landscape. In effect the Society is allowing that which they have been charged with preserving to be destroyed. The Newark Octagon is a golf course and is groomed with precision machines. The grass cover keeps the soil in place.

Carbon dating of charcoal at the Alligator Mound tells us it was built about a 1000 BP. Or does this actually tell us the date of a forest fire or a controlled burn to maintain the site?

Trees, erosion and careless reconstruction all contribute to creep but there is another way they creep out of round.  Persons charged with digging the dirt out of the ditch at the Great Circle and putting it back onto the top of the mound year after year work around the circle. Each and every year slight variations are introduced. The change is so incrementally small that it is never noticed until someone comes back a thousand years later and says, “Yo, your circle looks like an oval!” They creep out of shape. What can contribute even faster to creeping is a sloped site. Fortunately, few are on slopes. Numerous reconstructions and rearrangements in areas such as Thornborough indicate that over the centuries different generations have left their mark, so too we must assume this has happened at both Hopewell and Adena sites.