This piece from the Crespi Collection was found during construction of the Airport in Cuenca, Ecuador. By identifying the letters as Paleo-Hebrew (Phoenician) circa 200 to 100 BC and Hebrew Letters as derived by J. Huston McCulloch in his study of the Newark Decalogue Stone from Ohio, the Elephant Tablet is translated. The language used to aid with the translation is Anglo-Saxon. A study of the stele when read in Boustrophedon style (back and forth) provides these words: bad, death, beat, cave or pole, dwell, lame, bucket, An, dish, change, origin, peck, cave or pole, eye, Baal, and area.

So perhaps they suggest…

The back of the mammoths was broken –

It was a bad death. It beat at the pole. There is a bucket where An dwelt. It is a dish where it changed (?) the origin (?). It pecked at the pole at the eye. Baal was there.

The letters can be converted to numbers as shown in the next image and the sums as shown can be found: 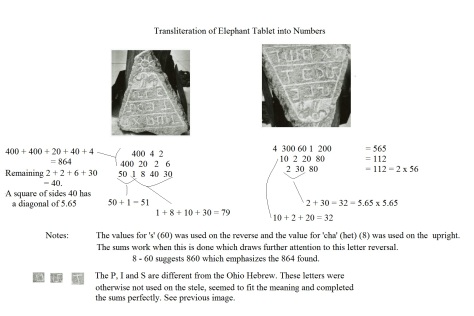 This number study reveals the all important 565. The numbers that comprise the word Yahweh by way of gematria are 565 10.

The 864 refers to the number of seconds in a day and to the seconds of longitude of the Earth or 86,400.

The 51 created by the letters AN then remains. There is this interesting fact. Cuenca sits nearly on the equator. By traveling 79 degrees longitude to the east and 51.51 degrees north of it one finds London and Greenwich, England the prime meridian. ??!!! ??

There is at least one other 56.5 that can be found. Because the letter noted as ‘sa’ or ‘a bucket’ is a pictogram the stele is composed of eleven letters and three pictures or 113 which is 2 x 56.5.

The most important idea here is that these numbers have been imbedded in ancient documents for millennia which lends credence to the Ohio Hebrew being valid and thence, the Newark Stones.

Back to Newberry Tablet beginning or its  conclusion.