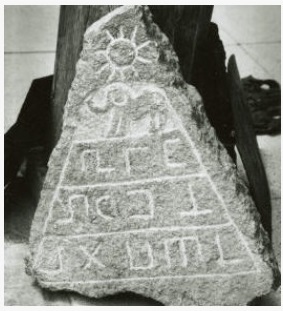 This piece from the Crespi Collection found during construction of the Airport in Cuenca, Ecuador is obviously related to the three stones shown below. In a previous post this stone was translated. Can it be determined if the other three are copies of this stone and if the copies were made relatively recently?

Using transliteration into Paleo-Hebrew circa 200 to 100 BC and Hebrew Letters as derived by J. Huston McCulloch in his study of the Newark Decalogue Stone from Ohio, the Elephant Tablets are translated with the aid of the Anglo-Saxon Language.

These copies of the elephant stone are believed to be from Burrows Cave which means their authenticity is in question. Read translation and comparison below.

These copies of the elephant stone are believed to be from Burrows Cave which means their authenticity is in question.

Compare the detail in the elephant and Sun. The Sun should appear as a dual reference to Baal’s crater as an origin. The Cuenca shows two eyes and lines radiating from a central O. The trunk of the elephant does not show the all important crater shape in any of the other copies. The back of the mammoth does not appear broken and in the eyebrow shape of Hudson Bay. This means the ‘copier’ was far removed from the significance of the detail, however, it does not mean they are forged.

The overall presentation on circular and chipped tile shapes is consistent with the story of Baal. The stones on the left and right appear freshly machined. And finally, the inscriptions in line 1 and 2 are different than the Cuenca but plausible. They read b-n-th and th-k, k-b, b-l or ‘beneath thatch cave Baal.’ The k-b can also be read as cab which means pole.

The letter ‘th’ in the first line is not reversed as in the Cuenca example which suggests two possibilities. The first is both lines are to be read left to right so the top would read th-n, n-b or ‘thin nib’ … ‘thatch cave Baal.’ The second possibility is the copier was unaware of why the ‘th’ was reversed in the first line and corrected it. The lifespan of the copier cannot be determined by this difference just that he might have thought it was an error in the original. The middle stone’s N (center of first line) is truer to the Paleo-Hebrew style then the other two suggesting it is an original or a more exact copy of another original with evidently valid lettering.

Lastly, note the facing C’s in the middle line of all four copies. These were seen in other tablets from Ohio and in art from Knowth, Ireland. Previously, using Luwian glyphs the meaning Great Origin or Mighty Crater was derived from this pattern. It also leads one to another translation of the middle line. If the ‘Th’ stands alone to represent ‘the’ and the C is the Luwian symbol for ‘great’ then the last two letters spell b-l. This then reads ‘The Great Baal’ which is totally plausible and in line with ancient wit to use two languages/alphabets within a text (as academics still do today) and two meanings within the same line.

Old and real? New and fake?

Or is it more likely… these are copies of secreted away originals?

Back to Newberry Tablet beginning or its conclusion.

In this piece from the Crespi Collection found during construction of the Airport in Cuenca, Ecuador….find the words in italic:

The angle to the Sun is measured in the land of Mammoth’s.

They thundered and lived at the top of the world.

Remember the Mammoths of old.

It reminds us by its nose of the snake which came to the two eyed–radiating center,

by its curl of the cup which is now there,

by its pounding walk of the beating Earth took,

by its tusks of the stabbing Earth endured.

Earth’s back was broken and bears the two bows of Baal.

The cup is now mouth to the world

which helps divide it in an orderly fashion to the peak.

By identifying the letters as Paleo-Hebrew (Phoenician) circa 200 to 100 BC and Hebrew Letters as derived by J. Huston McCulloch in his study of the Newark Decalogue Stone from Ohio, the Elephant Tablet is translated. The language used to aid with the translation is Anglo-Saxon. The stone reads in Boustrophedon style:

Where the Mammoth’s lived….

The bed of death is where the beating made a cave. There dwells the lamed mechanism.

There lies the dish that tipped the top and shagged all.

Back to Newberry Tablet beginning or its  conclusion.