The Cross amid the art of the Book of Kells symbolizes the cross of Christ. Or does it? Why would a people be led to constantly remember this shape through the retelling of the death of its messiah? A not so simple answer is that once upon a time someone wanted something else entirely remembered and since they were soon to become a conquered people they worked their own beliefs into the newly arrived religion. So we see in this art a beautiful cross and what do we see laid out quite neatly in Newark? Why a cross! And amid the cross is a diagonally placed square just as we see in the Book of Kells! 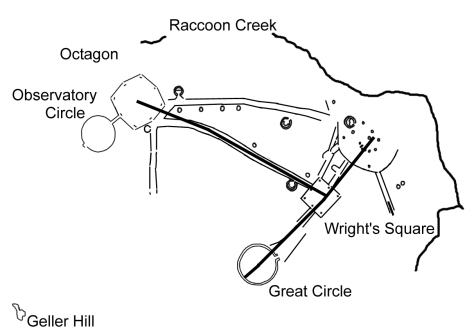 A cross imbedded in the layout of Newark Earthworks. Wright Square is similar to the diamond that appears in the Book of Kells Cross.

We begin telling the story portrayed in Newark’s layout by examining the square within the cross. This portion of Newark Earthworks called the Wright Square is all but gone. There is a small portion that remains that marks the spot and other than that there are only survey notes. The beautiful Squier-Davis image is known to be incorrect for scaling despite its details. We know from a survey by Thomas in 1894 it was 928 feet by 926 feet. It is assumed by Romain1 2 and others that this is an error from an ideal of 925 feet yet these measures are not too far off for we see 926′ x 928′ gives us an area of 859,328 feet or very nearly 860,000 feet. Hively and Horn report that the east-west axis of the square is 92.8 degrees.3 They felt this was a .8 degree error from the Lunar rise-set point. Yet, one should pause to note the similarity between this number and the size of the square, 928′, which suggests there is no error here.

Going further they report the northwest entrance path runs perfectly straight for 160 m (useless meter!) or 525 feet (or was it 528?) at an azimuth of 306.8 degrees. It then enters the square at an angle.  With a bit of math it is easily determined this is an angle of 56 degrees to the azimuth of the north-south axis. (360 – 306.8 + 2.8 = 56) Furthermore, they were perplexed as to why this avenue did not enter at the center of the side but instead at 30m (useless meters again!) north of the center of the side. We calculate 98.4 feet + 926/2 = 561.4 feet. In other words, the opening breaks the side into two portions: one 561 feet and the other 365 feet. We should immediately recognize the meaning of the latter! This notably repeats the value of the angle of the path at 56 degrees.

The square has been discussed first because it seems so insignificant but it appears in all ancient art. It is usually portrayed as the literal seat of all measurement.

Overall, we see in this layout of Newark two structures on the left and three on the right. Two and three create the number 23 or perhaps it is 32 if read right to left. We have seen that the square of 5.656 is 32. Perhaps we should think of it as 23 degrees and 32 minutes and add it to our growing number list.

Does this place with its mounds and ditches speak of the gods? Does it speak of Baal? We note that in Hebrew gematria bet, B, is 2 and lamed, L, is 30. So, the value of the name Baal is 32. The layout then “counts” the name. But if it is 23 then kaph, k, is 20 and gimel, g, is 3. Keg  in Old English is the modern word keg. Might this layout “counted” out mean Baal’s keg? Or Baal’s crater?