The story Newark Earthworks relates is the historic tale of Beltane. We begin in the upper left of the layout with the circle, a comet Baal, which impacts with Earth represented by a square. The union of male and female occurs. The square rotates, shatters and a translation occurs. The story continues at the bottom right. The Earth is reformed with a scar. The Old Testament uses the symbolic number 6 for the length of this re-creation of the world. The Earth absorbs Baal represented by the bird within the Great Circle with its crescent as the crater. The Earth’s relationship with the Sun is represented by the square. Earth’s orbit is slightly oval. The square tells us this with its slightly out of square shape. We take our measurement of length from the Sun’s diameter. A mile is 1/864,000 of the Sun’s diameter. We take our measurement of time from the Sun. There are 86,400 seconds in a day. The square’s area echoes this value. The Earth travels about the Sun at 66,624 miles an hour as depicted by the angle of the Great Circle’s neck at 66.6 degrees.

Does the Decalogue Stone depict Baal and the Earth? By B.L. Freeborn, 2013.

This is the dreadful message of forgotten Beltane and the great religion of Baal. The Baalist’s left us a message in Ohio.

Their minds were full of geometry, numbers and long ago calculated celestial values. They traveled the planet in their angst, their woe, over this event that destroyed all mankind. They were the last of the educated survivors of a prior civilization and their determination to preserve what mankind had attained scientifically prior to Baal’s destruction is at the root of our civilization today. This is an amazing story. It is the cosmology that we will rediscover because “the truth will out.” And once we understand it, the miracle and fortitude of life upon this planet will seem all the more wondrous. We can fancy that this debate over the Decalogue Stones will not die easily because some of the magic of the incantations written upon them call to us still today. We can hope that the prayers put into the mounds as they were built protect us still from the return of Baal. These Angle builders have new modern names: Luwian, Adena, Hopewell, Celts, Irish, Picts, English, Cherokee and many others. We have forgotten who they were. We are rediscovering what they preserved for us. Shamans of long ago teach us our forgotten worldwide heritage. They wove the message into the Earth for us to find. They created simple, straightforward images. This is a warning to value what is truly important and that we too can be knocked back into the stone age. This is our history. It recalls the day a great civilization ended and a scattered few survived to repopulate the world. 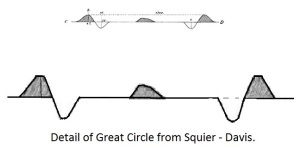 But we began with the debate over the Newark Decalogue Stones by questioning whether they are fake and if they are Jewish. Now we wonder if they are Baalist? Or are they Anglo? Were they left by visiting engineers? Did they belong to the High Shamans of the people who built the earthworks who were educated in surveying and of Baalist belief? We have explored these issues. It is time for a conclusion. Here are three images to help one form an opinion. The image above lies hidden in the Decalogue Stone. The next is Squier’s detail of the Great Circle and the last is from NASA. Their art reveals they had an excellent understanding of what transpired. They spelled it out for us in every manner possible. Can we grasp the horror of it all?