Another ancient riddle presents itself in this fabulous and famous painting of the Last Supper by Leonardo da Vinci. It is well known he was involved in secret societies. Is he revealing any secrets in this painting? 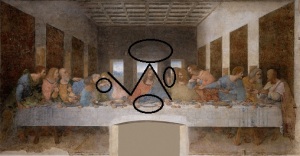 Perhaps some meaning can be affixed to this possible symbolism.

Note the similarities to other ancient art studied in previous posts as shown below.

Copy of stone found at Grave Creek Mound, West Virginia, Ohio River. The middle column depicts the up and down triangles.

Shaman Bear from Newark Mounds, Newark, Ohio. The man holds a decapitated head on his lap.

Assyrian Relief, Detail of Cup, Brooklyn Museum. The dish on the center of the table like the dish in the relief seems to be central to the topic. 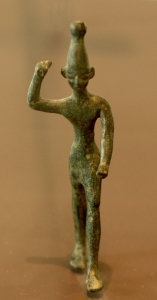 Baal, a Statute from Ugarit.14th to 12th BC. Louvre, Wikipedia. The man points up with his right hand and his left hand is held low.