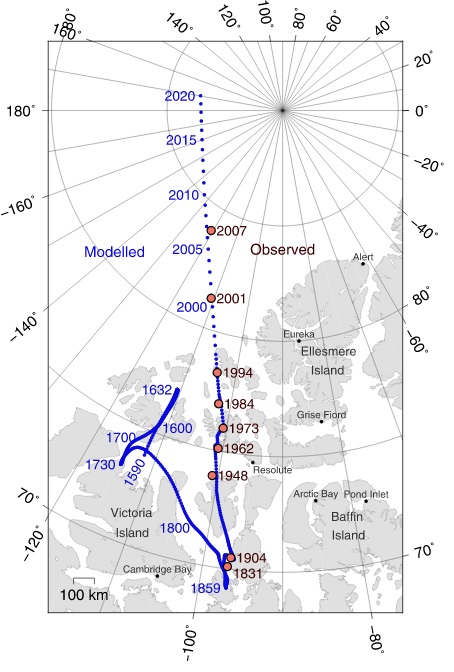 Earth’s magnetic poles shift over time whereas the true poles are fixed geographic locations. The magnetic pole is the place where the lines of force are oriented vertically into/out of the planet. Mapping of the Magnetic North Pole shows it was north of Victoria Island, Canada in the 1600’s and south of the island in the 1800’s. Since then it has moved in virtually a straight line towards the Arctic Circle to approximately 160̊ W off the coast of Russia. As indicated in the image, the predicted movement of the north pole is in a clockwise rotation around the true pole.

Similarly, the South Pole was at the Ross Ice Shelf in the 1600’s, then it moved in a northwest direction and now lies off the coast at 64.28°S, 136.59° E (2015). It has shifted from 160̊ E to 137̊ E since the 1600’s and travels six to nine miles a year. It is predicted here that the south pole should behave in the same manner as the north and take up a clockwise rotation (when seen from the south pole) around the true pole. However, it may be sometime before the process completes in the south since it is still 1,780 miles from the true pole. The magnetic pole is not a true dipole at this time since they are some 20̊ apart in latitude.

In accordance with the theory presented in this paper, the rapid shifting of the poles in the north in the last few decades is indicative of the final stages of reprogramming of the mantle by the inner core. The speed with which this process occurs can be easily observed in small magnets as magnetic fields are induced or flipped with more powerful magnets.

Throughout these many pages and articles magnetic north has been quoted as lying in Hudson Bay at 56.5̊ N 79.2̊ W. Charles Hapgood’s best guess through his research was a location of 60̊N 83̊W. These two points are about 280 miles apart. Previous pole locations were the Greenland Sea Pole 72̊N 10̊W about 75,000 years ago and the Yukon Pole 63̊N 135̊W  about 120000 years ago. These locations were determined by examining magnetic patterns left in the sedimentary layers and other evidence. (Hapgood, Charles, “Path of the Pole,” Adventures Unlimited Press, Kempton, Illinois, 1999.)

Before leaving this topic it is worthwhile to note that when the North Pole was located more inland the winters were more frigid and ice stayed longer in the Arctic. The south pole has moved just off the Antarctic coast and despite the breaking away of large parts of the ice shelves the sum total of ice on the continent is growing. Remember each snowflake forms around a dust particle and those particles respond to the magnetic pull at each pole. Because the magnetic pull is directed vertically downwards in these regions the tendency should be for the snow to build up there.

When the pole is located in the ocean the ice builds up and its buoyancy pushes it to the ocean surface. This allows more to build up on the upper surface but ocean currents work to pull it away underneath which weakens it as it attempts to build. There is no undercurrent to reduce the ice and particle build up when the pole is on land. This leads one to speculate that the ice should build up and its accompanying cold should be more severe when the poles are on land. So perhaps the location of the poles is another large contributor to global warming. The possibility also exists that the accumulation of particles over long spans of time at the magnetic poles may have contributed to the formation of the continents.

Experts tell us the earth is losing its magnetism. Maybe. Maybe not. So there it still more to come…. in the next section.

Back to previous section. Back to beginning.