– It is not what is under the bed that is frightening, but what flies overhead.

(This is the conclusion to the series on the Mystery Stone. The compiled article is posted for those who missed a part to the left as a page.)

We have been discussing the images on the Mystery Stone of New Hampshire. The Face, the Top/Bottom Gears, the Tepee/Home, the Circle, the Arrows, Two Spears/Shield and similar Ancient Iraq art have been discussed in previous posts. Now we look at the innocent little spiral.

That innocent little spiral that stands alone so close to the bottom, is just a twirl. Is it innocent? We have seen it many, many times. It suggests revolution, infinity, turning, a whirlpool… Was it innocent? Or was it deadly? Was it so deadly that it takes a good understanding of engineering to grasp the how of it? What turned? How did it turn? Faster, slower, all around? Could it have turned? Something turned. What was the something? Or does it just mean the danger is all around us at all times, and is present still?

Many pages of discussion on this subject can be found in future posts.  The mechanics behind it from an engineering standpoint are explained in the paper: “A Planet Most Miraculous: The Mechanics of Earth’s Rotating Crust.” The what and how much is explained. But it is the ear of corn that tells us what turned and what happened.

So, let us look at that plain old ear of corn. 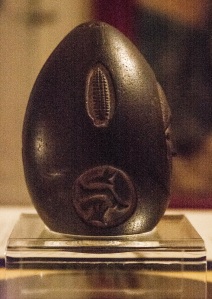 Corn and Shield side of New Hampshire Mystery Stone, B. Freeborn, Public Domain

It is an ear of corn, plain and simple. Most importantly it has been shucked. The rows run in vertical lines. The kernels run in orderly squares. Remember that little square purse the fierce spirit held so firmly with his big muscular arm in the Assyrian relief from the prior post? It is the same idea. So here is a quick riddle that repeats and repeats in all this ancient art. What meets at right angles, runs in rows, runs in columns, segments round objects like in pine cones or kernels in corn? And from the image of the tent we can add, what fans out from a central pole?

Would an ear of corn not amply portray the concept of longitude and latitude to an intelligent scientific civilization, supposedly us, in the distant future? Given our knowledge base should we not be able to grasp that they are trying to convey the message that the impact of a comet turned the lines of longitude and latitude? Are they not saying that the planet was shucked like an ear of corn? But this is impossible!!! Not really. I give an explanation of the mechanics from an engineer’s viewpoint in the  paper linked at the sidebar. 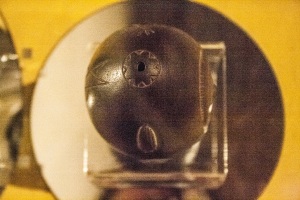 We shall add credence to this interpretation. If you look at the stone from the top down, you see directly opposite to the corn is the tent. One represents longitude. One represents latitude. Between them is the central pole and the image of a gear. Longitude and latitude work together.  The dividers are poised alongside to measure the change.

We have discussed all the images except for the last circle with the funny images within it. We will close by returning to the face.

This circle with the deer leg or arm thing seems like the artist was trying to draw a shield made out of pinto hide. When the realization dawns as to what it is, opinion changes. This can be interpreted in many ways. Is it an image of an arm raking and creating grooves with flames spouting out of mountains, and volcanoes in the upper part? It can also be seen as submerged land. Perhaps this is an image of what happened after the impact of the comet. The planet was raked. It was exploding, and ripping. It was being destroyed. As the surface was shucked the crust folded in places and chasms gaped wide in other places.

Where -oh- where was man during this assault upon the planet?

There he is in the same image. It changes now. Now we can see it as an arm swimming through debris. We see animals in the water with him. They are drowning as the oceans rolled out of their basins. This is what would happen if the planet is disturbed. This was not a tidal wave here and there. It was all at once. All of it. Water. It sweeps up and out of ocean basins like a tipped bowl. It is a force that cannot be reckoned with or imagined. They are swimming. They are all in the water on a drowning world. The deluge is upon the world. And it rained for forty days and forty nights. 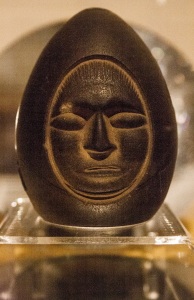 Now the image of the face reappears. It is a chilling, cold image. It is a man floating and dead in water. A silent face bobs upon the dark black surface. Sightless eyes stare into nothing. Mankind is gone.

There is more to this story. I suggest that you not stop here. Future posts explain much more.

We close with the story of the stone:

We were a contemplative people who lived on a planet 7910 miles in diameter that turned at a fixed rate around a Sun of diameter 864,000 miles.

And this place we called home.

We measured our world and the heavens with rays of longitude. It was perfection.

Our lives were complete until the day the meteorites came.

And then the comets struck.

We saw them coming. Two impacted with the planet, our home. Because of the impact the earth was shucked like an ear of corn.

The planet was raked and burnt. The ground split asunder. The mountains spewed forth flames. The people and all that lived were engulfed by the oceans. Nothing was spared. The deluge was upon the land.

We all perished. Our homes, our peace, our happiness, our knowledge, all gone.