Moses and the Ten Commandments bring to mind Noah and the Ark.  Perhaps one can see the resemblance to the ark in this side image of the Decalogue Stone? It had three decks and was covered on top to one cubit.

Side view of Decalogue Stone 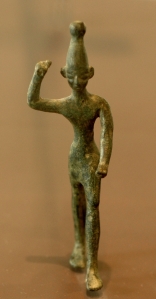 Or perhaps one can see in the image of Moses, with his one hand that points up towards his face and the other arm held rigidly at his side, the same posture as this statue betrays from Ugarit. The language of Ugarit is so similar to Hebrew that it is helping scholars define words in the Torah better.

The statue is attributed to worshipers of Baal 14th to 12th century BC which may explain the hat with a ball on top. The ball could be the source of the ritual of placing a stone on the forehead. The suggested use of the Johnson-Bradner stone was as a Jewish ritual stone worn on the forehead (rosh phylactery).

Stones found in skulls, balls on the heads of statues, ritual stones where they ought not be…. do any other oddities surround this mystery? How about one 864,000 square feet in area?

Stela of Ashurnasirpal II from 900 BC. Similarities to the Decalogue Stone are apparent. From Wikipedia by Geni. CC-BY-SA GFDL

Bradley T. Lepper, Ph.D. is the most anti-Newark Decalogue Stones voice of our time. He seems to be stuck in 19th century rhetoric and cannot see beyond the limited arguments of the past. Many arguments for/against the authenticity of the stones both then and now bring to light the politics of the era during which they were found. Lepper is stuck in the period and regurgitates the arguments of the past quite thoroughly. If you are looking for a review of past arguments then read his paper published by the Johnson-Humrickhouse Museum (present home of the stones)1. His article “The Newark Holy Stones” in Timeline2 is a repetition of these exact same beliefs. Or for no expense at all these articles can be summed up in total as:

They are fake. Proven fakes! Because I said so!

You may see this for yourself at these free sources:

In the second link, pause to look at his sources. Yes, all his sources are himself.

Perhaps it is time to recall a thing or two about archaeology.

The typical way to examine these stones usually contains an overview of the political environment in Ohio during the time period and then it deteriorates into an impossible who-dun-it. Lepper has forever committed himself to this one view. Let us look at another aspect of the historical time period that archaeologists then could not comment on because they did not have a crystal ball to see what was to be unearthed in their own newly developing field.

The Keystone was found in late June 1860 and the Decalogue Stone in November of the same year. The Civil War was just around the corner. What else was happening?

Frenchman Paul Emile Botta on the banks of the Tigris in the area of Mosul discovered Ancient Assyria in 1843 to 1846. He had unearthed a summer palace near the ancient city of Nineveh. Up until this time the oldest civilization known was that of Egypt. The only source of information on the ancient world at that time was the Bible. It was a newspaper sensation! He had happened on a city complete with monuments and written records in undecipherable cuneiform. The discovery of Nineveh would follow. This is a mere fourteen years before the Keystone would be found. It was twelve years after that in 1872 when George Smith labored over cuneiform texts and read the story of Gilgamesh for the first time in modern history. It would be some years before he would find the story of Ut-napishtim, one of the precedent versions of the tale of Noah. It was not until 1880 until the stela of Lagash would be unearthed. It would be some forty years before the Tower of Babel would be discovered.3

It is an image described as being that of Nimrod that Henry Layard discovered a few years prior to the stones’ discovery that Lepper uses in his article to compare to the image on the decalogue. Because they are both Caucasian men in profile under an arch, he concludes it is fake. Pardon me, but if it is authentic would it not show a Caucasian man in profile under an arch just as in the above image?

The Rosetta Stone was discovered in 1799. Thomas Young began to decipher the hieroglyphic version of the stone and published his discoveries in 1816. Jean Francois Champollian continued deciphering hieroglyphic Egyptian and published in 1822 only to be greatly opposed. Indeed as Cyrus Gordon summed it up “As a rule, innovation is welcome only when it is confined to surface details and does not modify the structure as a whole.” 4 Opposition to Champollian’s work did not end until 1866 when he was proven correct by another discovery. This was 34 years after his death and two years after David Wyrick, the discoverer of the Newark stones, took his own life. The Johnson-Bradner stone was discovered a year later. Into this level of archaeological science were these stones brought to the light of day. With this level of knowledge were they judged valid or fake.

Is everything known today about the ancient world so that a true assessment can be made? Of course not! Ugarit would lie beneath the soil undiscovered until 1929. Decipherment of their language moved quickly building on previous work and by 1930 it was solved. Is Ugarit an important language? Yes! It is used today to help define words in its relative language Hebrew. All of this was un-imaginable in 1900 let alone 1860.

An entire empire was rediscovered in the late 1800’s. Excavation began at Bogazköy, Turkey (Hattusa) in 1906. Archaeologist Hugo Winckler found a royal archive with 10,000 tablets.5 These tablets are still being translated. Work on this language continues at the Oriental Institute of the University of Chicago. All of this ongoing work has revealed a vast and powerful empire that reigned for 600 years until its collapse in 1178 BC. It had been forgotten but for a whisper.

It will be sometime before this vast library is completely translated. What is Lepper going to do if one of those documents refers to great earth monuments built on a distant continent in a great valley far to the west in one of their distant colonies? What if another stone in a script similar to the Ohio Hebrew appears in the future at a “legitimate” dig?

If your exclamation is Frank Moore Cross, Harvard University Professor of Near Eastern Languages, is of the opinion that the Decalogue Stone is a “grotesque forgery that cannot be taken seriously.”  Please recall Cyrus Gordon (1908 – 2001) was not so adamant and thought they were Samaritan mezuzah stones (prayer stones that are put over the door) as opposed to phylacteries (prayer stones worn on the arm).

We have also not looked at Altman’s opinion as of yet either. In other words – don’t leap with Lepper just yet. We have a few other opinions to peruse and then those promised numbers ….. !

Back to TABLE of CONTENTS

Back to PREVIOUS SECTION

Forward to NEXT SECTION

If the Newark Indian Mounds of Newark, Ohio were not large enough to contain a golf course (which they do) they would have been declared a fraud and a hoax. The Decalogue Stone and Keystone, two stones with Hebrew inscriptions found at and near the site have been declared both a fake and real. The debate over the stones has raged 153 years.

Today’s greatest anti-stone debaters are: Kenneth L. Feder, Ph.D., Professor of Anthropology at Central Connecticut State University and Bradley T. Lepper, Ph.D., Affiliated Scholar at Denison University in Granville, Ohio and Archeology Education Coordinator at the Ohio Historical Society.  They are joined by others who parrot their words such as Keith Fitzpatrick-Matthews, Archaeology Officer at North Hertfordshire District Council, England, educated at University of Lancaster and Letchworth Grammar School and is a former nightclub DJ who writes “Badarcheaology.”

Some of their arguments are logical. Some of them are not.

There is considerably less written on the Newark Mounds since there is just not as much to debate. They exist. They existed prior to European settlement so they are not forged. They have been altered but that work was either done in the interest of preserving them or removing them from existence, which is why three large portions of the mounds are in viewable park-like condition today and the rest has made way for progress. There is serious academic work being done on them with some pretty cool new instruments like LiDAR. William F. Romain, Ph.D. Archaeoastronomy, Research Associate for Newark Earthworks Center, Ohio State University leads in this field by far. He picked up where Ray Hively and Robert Horn of Earlham College, Richmond, Indiana left off in 1982. Joseph M. Knapp has written web-articles “Hopewell Lunar Astronomy: The Octagon Earthworks” and “On the Great Hopewell Road” which begins in Newark. He introduces us to James A. Marshall who has spent many hours actually surveying the mounds and has studied the geometry used in building them. This lovely image of the mounds is from James Q. Jacobs extensive site on the archaeoastronomy of ancient sites.

No one can say academic archaeologists are ignoring this topic. It is a mainstream debate and the arguments are becoming increasingly scientific … well…. except for Lepper’s and the Dj’s. To add to the topic at this point either good tools and/or observations are required.

There are a few gaffs in the arguments on the Stones on both sides. Perhaps the only way to really resolve the issue is to look at the Mounds themselves. Instead of debating endless rounds of “who is/is not guilty of faking them” perhaps we should change the question entirely. To do so we might have to throw out a lot of what we presume is actual fact. We need to see if there are any circumstances under which it would be appropriate for a “Jewish looking” stone to be found at the mounds pre-Columbus. In my mind their presence can only be logical and legitimate if they can be associated to the mounds themselves.

So we begin looking at the Stones by looking at some of the arguments of the current debaters and then there is a good deal of mathematical information about the mounds to share. The legitimacy of the stones aside, the geometric study proves a great intelligence lies behind the design and layout of the mounds. When done you will have a solid opinion …of some sort.

Forward to NEXT SECTION

Back to posts on KNOWTH KERBSTONES