Here is a short riddle…

Using the above key to the Hebrew letters find:

Torah The
the of one using written was
or created ever codes simplest
considering,
it break to took it long how
.difficult most the of one,

Then read them right to left:

The Torah
was written using one of the
simplest codes ever created or,
considering
how long it took to break it,
one of the most difficult.

Apply this same method to this verse from the Torah. (Word order already reversed.)

From Old English to modern:

It tossed, seared and raved above as it was bent where it looms

And these are some of the numerous other gems:

“Gaze on it all and how it was essentially horrible.”   -Numbers 6:4

“It quelled the living with stones that were abundant
It billowed forth thus as it ebbed at the gorges
in the lands with wasting heat.”    -Numbers 22: 38

“The battles on the living were woeful omens and flames that married.”    -Numbers 22: 41.

The text of the Torah has been translated in this same manner and is available in Ancient Words of Genesis I, Genesis II, Exodus, Leviticus, Numbers, Deuteronomy, Companion I and II. (Links in images.)

© 2015 B. L. Freeborn
The Bat Creek Stone was found in a mound beneath a skeleton in Loudon County, Tennessee in 1889 during a dig by the Smithsonian Bureau of Ethnology. Because it appears to have Phoenician or Paleo-Hebrew letters it has been dubbed a fraud. Arguing in favor of its validity is J. Huston McCulloch who describes the controversy at the site noted below and linked here. It is also described at Wikipedia under the Bat Creek Inscription.

No satisfying, controversy resolving translation has been made. The following may not put the matter to rest either but it is new and unique! All other attempted translations have failed to note this is an extraordinary number riddle. The numbers are found by recalling that letters originally had number equivalents and not separate symbols as we have today. Using the Hebrew gematria or number/letter system the values appear as noted below and the riddle of the numbers is solved. In turn this confirms that the correct letters are identified in the translation.

The two lines and dot in the upper left were not shown in a detailed sketch of the stone done in 1890. Take note: It is assumed here that they were originally on the stone but attributed to shovel scratches that occurred during excavation by the 1890 artist. Because he assumed they were not part of the inscription, they were subsequently left off his drawing. However, to complete the number riddle as described below they are required. Also double line marks appear on the Metcalf Stone. The Grave Creek Stone has parallel lines and a dot. They suggest: longitude lines, the idea of to or via, and the number two.

The letters used to translate this inscription are from oocities.org and were in use in 800 BC by the Phoenicians. Note that the L and P are more in the modern Latin Alphabet style and a reversed E which is an H in Phoenician also appears. The straight line marks are the simplest way to indicate the number two and this style of indicating numbers has a very long history. Hebrew gematria used the letter ‘b’ and in fact our ‘2’ is derived from this very same letter form. So, there are intentionally two alphabets in use in this inscription. It is typical of highly educated people still to this day to insert some Latin phrase into their argument for emphasis and so we see it is also done here. The L and P are further confirmed and identified in this manner. (See note to reader below about using P as R.) 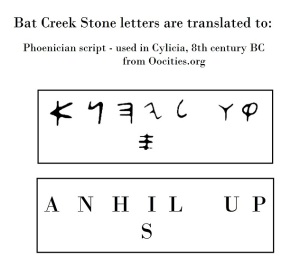 The language is not Hebrew but Anglo or Old English as has been noted in other Adena Tablets from the nearby Ohio area. This does not mean it is a fraud but that there is a major part of history that has been obliterated and not yet recovered.  The impossible idea that this stone is -valid- because it is in English/Anglo written in Phoenician letters is an idea that will be expounded upon in further posts. The reader should understand that academics tell us English (Anglo) originated 1300 years after this alphabet was in use or 500 AD.  (See Sator Rotas post.)

The stone is read top to bottom – left to right then right to left – bottom to top in reverse. Repeat all the letters and do not forget the dots! (The letter ‘u’ has sounds: u, v, o, w.)

If the dot means ‘eye’ with sound ‘i’ then it translates as follows (see image below):

To the eye of the One Upper Hill -the ice seat –  the powerful eye of the stone lies forever. There are two eyes.

To the mountain of ice, the eye at the top of the world, to the seat, came powerful stone eyes. There are two eyes.

The first lap begins at the second pole.

Recall that in Hebrew gematria the sound for ‘a’ has a one value. There is no value and letter for ‘e’ so here the ‘E’ is given the value 1 or as spoken it is ‘a’ or ‘an’ meaning one. Recall that in ancient texts they often speak of An which is presumed to be a goddess. Combining these ideas then this phrase suggests a second pole is made of the One original pole and this is its ‘lap’ or latitude/longitude position. We recognize two poles today: magnetic north and true north. This leads to the final idea and most important part of the riddle.

By solving the number riddle (see below) this critical line can be added:

(This is the location of southeast Hudson Bay on the arc and close to magnetic north which is moving northwards.)

The reader should note that the Bat Creek Stone is still easily translated (in words but not numbers) if the P is actually an R. The wording changes to ‘or’ = origin, and ‘ro’ = row, order. The witty riddler cleverly hides another word in the letter’s confusion. This is the word ‘pr’ and ‘rp’. The first suggests pair and the latter reap or rape.

A raping pair is the origin of order.

But there is more to this confusing letter! The H looked suspiciously like an E and if this is combined with the r-p duo then the words e-p-r and e-r-p, or appear and a-rope are created. They suggest that:

The raping pair appeared and provide the one rope.

This interpretation recalls the riddle of the Sator-Rotas Square. The inner ring of that puzzle is formed by the repeating letters E, P, E, R, E… or, P, E, R, E … which now look suspiciously familiar. The words ‘ro’ ,’or’, ‘op’, and ‘po’ are notable in that puzzle as well as ‘en’ and ‘ne’.

The number riddle is solved by substituting the Hebrew number equivalents for each letter and by noting the left and right half separated by the dot should be equal. This resolves any confusion about identifying the letters and how the ‘p’ was determined over the other possible letters ‘q’ and ‘r’. If the ‘i’ (letter directly left of the ‘L’) is considered to be an angle sign then the left half reads 56 (angle) 30 = 86. This 56 degrees 30 minutes is the latitude of Hudson Bay. The 86 is the diameter of the Sun or 864000 miles. The forty of 864000 is present if the numbers (1 50 5 10 30 6 80) are read as 56 40 86. Adding further support to this idea, recall that a square of sides of 40 has a diagonal of 56.5. The 56 degrees 30 minutes can be written as 56.5 degrees. The reference to the sun also confirms they are talking about latitude since the sun is used to measure latitude. 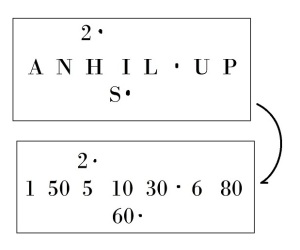 The translation of the Bat Creek Stone into both letters and numbers.

Other reasons to assume the two straight lines are part of the original inscription are as follows:

Counting the letters left of the dot find 5 and right find 2. There are 52 weeks in a year. There are 7 letters in this middle line. There are 7 days in a 52 week year. Indeed, taking the 2 upper lines into consideration there are 52.2 weeks in a year. Further still there are 7 plus 2 equals 9 symbols above the ‘s’ or longitude/latitude symbol. This number pattern was found on other Adena tablets and suggests 79.2 or 7920 the diameter of the planet in miles. The longitude of Hudson Bay is 79 degrees 20 minutes west.  The longitude of  “to-run-to” or otherwise known as Toronto, Canada is 79 degrees 20 minutes.

The total number of symbols is ten. The word ten is associated with tien (fork tines) and teon (torn) in Anglo /Old English. This idea and use of the word ten appeared in the Sator Rotas.

Observe further that the 5, 7 and 2 can be assembled to create 57.2. The number of degrees in a radian (used in spherical calculations such as astronomy and navigation) is 57.29. The 9 is found by noting there are 9 symbols in the top two lines.

Note also this manner of counting. Count 2 lines then a dot equals 3 for 23. The middle line is then 5 symbols then a dot for 6 making 56. Count from the right 2 and a dot for 3 and find 23 again. The count can be continued right to left. The 23 is followed by 5 for 23.5. This 23.5 is the latitude of the Arctic Circle which surrounds the north pole!

Alas! The importance of using the Latin L and P was nearly forgotten! The L gives us 30 and the P gives 80. Recall the H when seen as a Latin E gave us 1 for 111! The longitude of Barringer Crater in Arizona is 111 degrees and 10 minutes. The square of 111 is 12321 or the suggestion that order appears from 1. If we take the final step and add the 2 lines at the top left to this sum then 113 is obtained and this is twice 56.5!

Enough is enough! There are probably more!

So, whoever the hoaxer was that inscribed this stone we know for a fact they were darned good at math riddles, knew gematria and knew all about Ba-al (Two Awls) in Hudson Bay!! That narrows the field of who dunits down a bit. The original author of this riddle was educated in two alphabets: Phoenician and Latin. He/she also knew that R and P  can be confused and took full advantage of it. The Phoenician letter style used was in use east of the Atlantic in 800 BC. The Latin letters evolved from Etruscan about 700 BC. Letter P was used as an R in the original alphabet. It evolved into a P as used today a few centuries later. This gives an upper limit to the age of the  stone as 2800 years but not to the story depicted as the Grave Creek Stone will show. The lower limit depends on when Paleo-Hebrew / Phoenician fell out of use on the west side of the Atlantic and when the last time this stone was copied to remember the wit and wisdom of the saying.

Next the Grave Creek Stone is examined. It too has a fascinating translation.

Translation of Bat Creek Stone and its number riddle.

The Kiefer Tablet, Wright, Lakin B and Meigs Tablets,

The Waverly Tablet, Metcalf Stone, and pdf article on